Childhood obesity represents a critical public health problem. It can be considered as multifactorial disease associated with serious health and social consequences in adulthood. In the province of Reggio Emilia, a multilevel and multi-target program for prevention and management of childhood obesity has been developed. The program is called BMInforma (Bimbi Molto In forma = Very Fit Children) program. CoSIE pilot is part of this program.

The goal of our pilot is to strengthen the collaboration among the stakeholders operating in the various areas of prevention and treatment of childhood obesity inside and outside of regional health services. To facilitate the interaction with families the pilot, together with the stakeholders, has been designing a mobile App for the co-creation of services addressed to the prevention of obesity and support of healthy habits thanks to the provided functionalities. 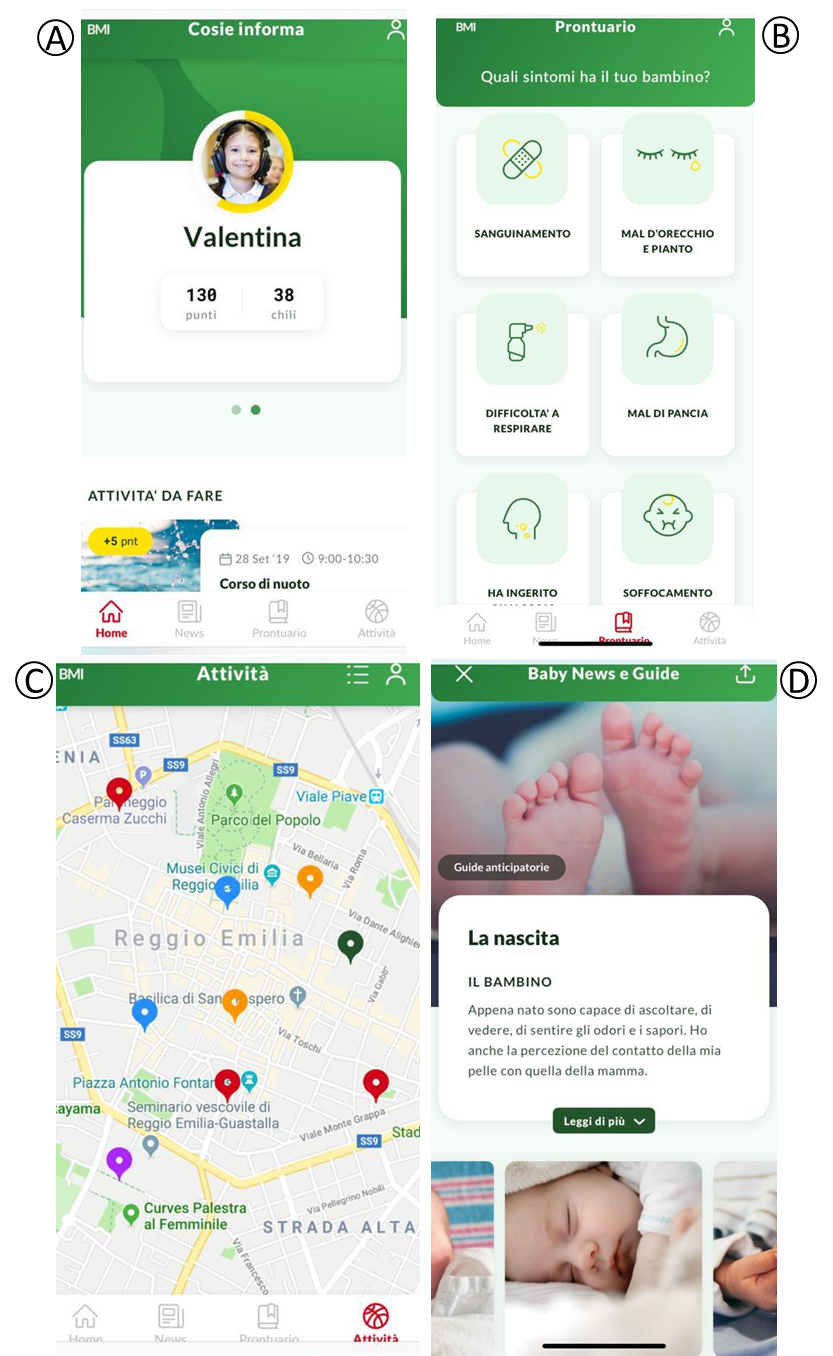 App prototype: my child’s page (A), if you have a emergency with children (B), opportunities for physical activities (c), support and advice if you have a baby (D).

Geographic area and target groups:
The target audience are the families living in the province of Reggio Emilia; especially families with overweight and obese children but also families with children who do not have particular weight problems.

Collaborators:
Many local Health Authorities in Reggio Emilia such as family paediatricians, hospital pediatric services, primary care units are dynamically participating in the project activities. There are stakeholders that are part of the province and services connected with the province like Reggio Children, Officina educative and Reggio City Without Barriers). In addition, parents, schools, sports associations and volunteer associations are actively involved in the pilot actions. 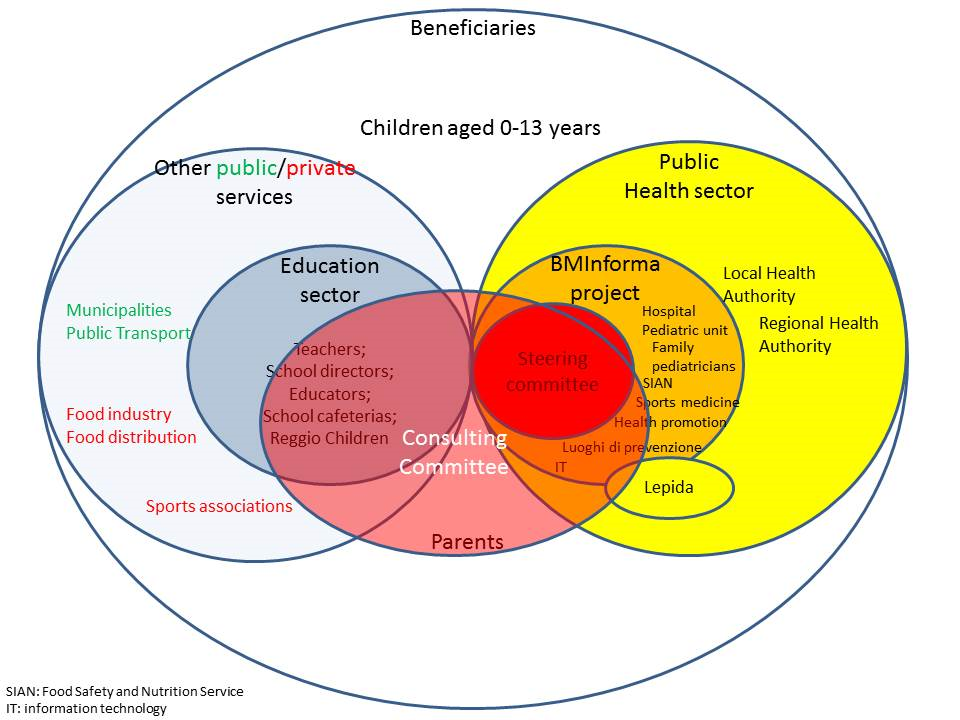 Actors, stakeholders, and users map. Public health and other services for child well-being, such as school, transportation, and city planning, are managed by different health service and municipal offices and services that do not fully exchange information. The BMInforma project was initiated by a group within the Local Health Authority. The co-creation and co-governance activities led to the active involvement in the project management of all the key persons in other public, private, and nonprofit sectors on the Consulting Committee, transforming stakeholders in actors.

Expected results:
One of the expected result is the launch of a digital tool – an App. Digital technologies will support the active relationship between pediatricians and families to address the problem of obesity. The idea is that the app will be a part of the everyday life of the participating children and that it will provide beneficial information for families and paediatricians and to children as well.

We are aiming to improve the organisation of the service delivery network while promoting healthy lifestyle. The pilot will co-create and implement preventive interventions in the community. To ground the intervention in the community, the pilot has decided to establish a local Consulting Committee with the members of the Stakeholders’ Map, and it was decided to leave it open to new members as well as to remain active still after the end of the project with the role to boost the local policies om childhood well-being.

Observation
The activities have been showing that the governance mechanism created in the co-creation process was the establishment of the Consulting Committee that met on regular basis. The number of its members has been increasing over the time and its composition remains open for new members. Participation in the Consulting committee was active showing a great commitment to the project aims for all the involved stakeholders.  It became natural changing the project organization and duties: most of the functions that should be done by the steering committee, are now directly managed by the Consulting Committee, organized in smaller working groups where the willingness to participate of all the members can be more productive.

Future
The co-produced App for the prevention of childhood obesity and promotion of a healthy lifestyle will be addressed to all parents. It will be at the same time the object of co-creation and a tool for co-creation of all the services that the health service, municipalities and school administration can put in place to promote health and prevent obesity.

In fact, working on the app is already creating a community of service providers in the public as well the no-profit sector, private organisations, and parents committed to evaluate all policies for their impact on child behaviours and well-being. Furthermore, the app itself will collect inputs from users on the services provided, thus being a permanent infrastructure for co-creation.